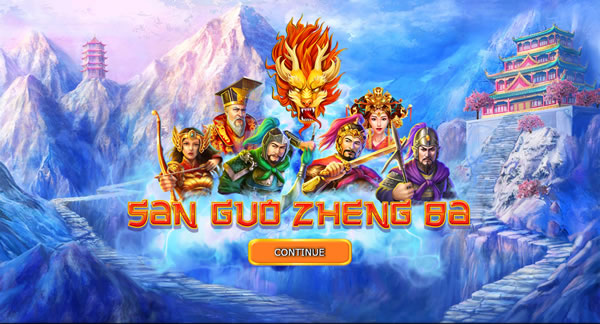 This beautiful slot game takes you back to Ancient China’s vast lands in search of treasures of the Xia dynasty. San Guo Zheng Ba is a stunning online slot game that is the product of the top game provider: RTG. The theme of the game is historic Chinese and based on the story of when three generals fought to crush the Emperor’s power. The English title is “Three Kingdom Wars.” This Real Time Gaming developed online slot machine was released in 2018. So, let’s unlock incredible treasures by spinning the reels. San Guo Zheng Ba is a 5 reel, 50 payline video slot.

The symbols of the game:

San Guo Zheng Ba has bonus features that can inflate your winnings. The wild dragon substitutes all symbols except scatter. It appears only on the middle reel and expands to cover the whole reel, and doubles your winnings in the bonus game.

Every slot player loves free spins because this feature is the most rewarding part of the game in terms of money.

Three or more Emperor scatter symbols will trigger 5 free spins. The scatter can turn up on reels 2, 3, 4, or 5 reels during free spins. All wins with a wild will double your prize. At the end of the free spin round, you will enter the God Spin Feature. Did I mention that the free spin round can be retriggered?

As I already mentioned, after the regular free spin round, you enter the God Spin Games, where you get three Super Spins that also involve upgrades to increase your prize. Upgrades are earned by the number of winning Scatter payouts that occur during the regular five free spins. Even if there were no scatters involved in the wins, a grouped Empress symbol would be added to reels 2, 3, 4, or 5. Each subsequent Scatter pay can also assign multipliers and transform reels into full Wild reels to further enhance your fortune. Scatter pay during the God Spins will award you an extra Super Spin.

San Guo Zheng Ba is a medium volatility game. That means you have a lower chance of losing your money than on a high volatility slot.

When you open the game, you will immediately notice that this slot is different from the slots designed for the Asian market. It’s a superb online slot machine in terms of graphics and animations.

It has one of the most stunning graphics we have ever seen. The landscape of ancient china with warriors marching toward the Emperor’s palace in the backdrop and the beautiful Chinese characters is intriguing and stunning enough to keep players entertaining for quite a while. So, watch how the battle unfolds for the treasures of the Emperor and the ruling of the Empire in this action-filled casino game that offers multiple chances of winning big. Amazing game.

San Guo Zheng Ba is available for either download or instant play version for all platforms, including PC and Mac desktop, iPad, Android on Tablet and Android, IOS, Samsung on Mobile phones.

We recommend playing slots on a desktop computer or smart TV for a better gambling experience.