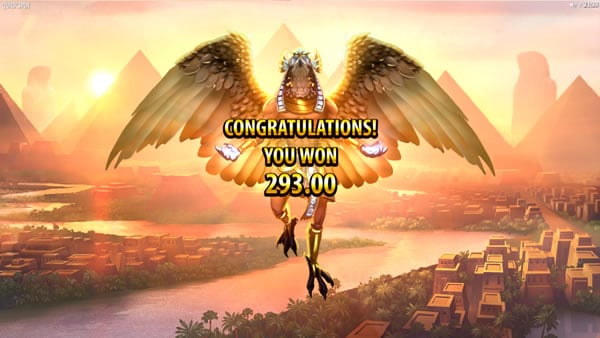 Golden Glyph is Quickspin’s video slot based on the theme of Ancient Egypt. So get ready to embark on an epic adventure in the land of the Pharaohs.

Golden Glyph has a 20 base bet. It’s a cluster pay slot with tumble mechanics featuring a Power Wild, which triggers the Power-Up features.
Also, there is a Free Spins Bonus with the Golden Glyph Wild multiplier symbol.

Tumble Mechanics are available in both the base game and Free Spins Bonus. Any symbols part of a winning cluster are removed, and the game will fill the empty positions with icons falling from above. Any new wins will be added to the existing win. The tumbling sequence ends when there are no more winning clusters.

The Wild symbol substitutes all symbols except the Power Wild and the Golden Glyph Wild. The Power Wild is available in the base, and Free Spins Bonus games.

If the Free Spin Bonus Power-up is activated, all unused Power Wilds are turned into Wild. Therefore, no additional Power Wilds will be awarded during the remaining tumbles of that spin. 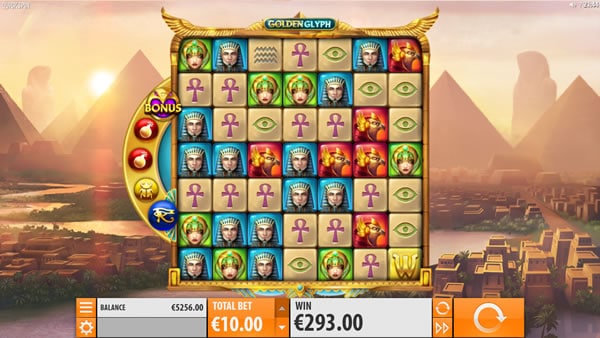 At the beginning of each spin, 5 Power-Ups are randomly determined, with the last Power-up always the Free Spins Bonus. Each of the first 4 Power-Ups is chosen randomly from among Golden Scarab, Eye of Horus, and Blaze of Fire.

Power-Ups are activated for each Power Wild used as part of a winning combination. When there is no winning, activated Power-Up is awarded in the order of activation. Furthermore, awarded Power-Up will be eradicated.

A magic scarab enters the screen and breeds 4 – 10 randomly placed Wilds in the game area, followed by a win evaluation.

The Eye of Horus appears on the screen to remove all visible occurrences of a randomly chosen low-paying symbol in the game area, followed by a tumble and win evaluation. Each removed symbol awards 1/20 of the current bet.

The Blaze of Fire lands on the screen randomly to remove all regular symbols in its row and column. Each removed symbol awards 1/20 of the current bet. However, Blaze of Fire does not remove Wild, Power Wild, and Golden Glyph Wild symbols.

The Golden Glyph Wild moves randomly to a new location on each free spin. If you manage to go up to the maximum 99x multiplier value, you win a  13,000x on your bet. 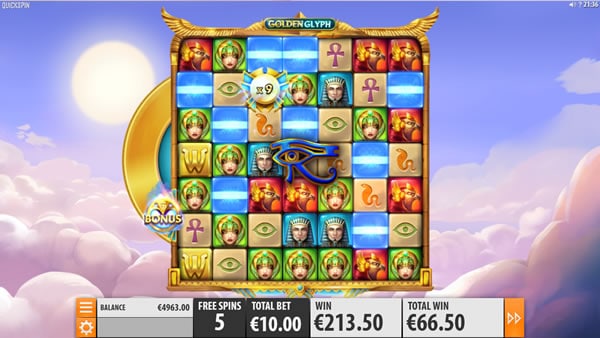 Golden Glyph is a medium volatility game. Its RTP is 96.19%.

The Golden Glyph slot has beautiful graphics. The game grid is framed in gold. In the background, there are magnificent pyramids. In our opinion, this is a superbly designed game with super exciting gameplay from Quickspin that is packed with rewarding features that are paying exceptionally handsomely. So it is unlikely to disappoint any player.

With lively graphics, an enchanting soundtrack, and a range of features, it is one of Quickspin’s best slots. So we recommend playing Golden Glyph and getting a glimpse into the glorious golden age of the Pharaohs.

A Night With Cleo


It is available for immediate play on all devices, including desktops, tablets, and mobiles.
We recommend playing online slots on a desktop computer for a better gambling experience.