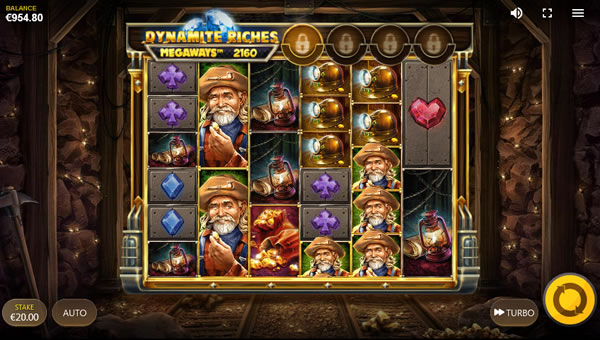 The high-paying symbols in Dynamite Riches Megaways include the prospector, bag of gold nuggets, miner’s helmet, pick and spade, and miner’s lantern. The lower paying symbols are clubs, diamonds, hearts, and spades made of gems.

Dynamite Wild substitutes for all symbols. Each dynamite band that lands on the reels contribute to the Feature Unlock Progress bar. Each of the four Features is unlocked in a specific order by landing 15 Dynamite Wilds. There are 60 dynamites in total, and they stop appearing after the final feature has been opened.

The Feature Unlock Progress bar displayed above the reels consists of four sections for one of the four corresponding unlockable features. When Dynamite Wilds land, they fill the progress bar of each section. When the bar is complete, the area is unlocked, the newly available feature is displayed, and the next bar is started.

Collecting 15 Dynamites unlocks the TNT feature. When triggered, all low-paying symbols will be removed for the current spin. However, Gold Spins entering the reels after the TNT doesn’t remove the low-paying symbols for the duration of the bonus round.

Collecting 30 Dynamites unlocks the Golden Wilds feature. Up to ten Golden Wild symbols may land on the middle four reels when triggered.

Collecting 45 Dynamites unlocks the Multiplier feature. The compass will appear first and spin to reveal a multiplier used to the successive win. The multipliers can be 2x, 3x, 5x, and 10x. If the multiplier is let off again before a winning spin occurs, the game will stack up the revealed multipliers to x20. During Gold Spins, the compass will instead increase the currently accumulated Growing Win Multiplier. If Gold Spins is triggered while having an active multiplier, it is transferred into the bonus round. Any multiplier earned during this round resets when the bonus round is over.

60 Dynamites unlocks the Mega Wild feature. When started, up to four Mega Wild symbols may land on the reels 2 to 4. They cover an entire reel and have a multiplier between x2 and x7 applied to all ways in which the Wild participates.

Each win during Gold Spins will increase a Growing Multiplier up to x20 that applies on all win ways. The multiplier will reset when the bonus round ends.

Dynamite Riches Megaways is a medium volatility game. RTP is 92.71%, which is far below the average RTP of the online slots.

This Red Tiger miner-themed game is visually stunning and genuinely enchanting. We are confident about it. In our opinion, the graphics perfectly fit the image of the gold mine. The icons are HD quality, look beautiful and charming, and the backdrop is dominated by dark brown as it is a mine.

Despite the plenty of features and the win multipliers, this Megaways slot would have benefited from more payout potential, such as higher payouts for symbols or higher value multipliers to make better use of them. In regards to gaming, with a top win at 7,000 of your stake, it’s less rewarding or exciting than many other Megaways games. However, if you’re after excellent-looking slots in the treasure genre, we recommend trying Dynamite Riches Megaways.

Dynamite Riches Megaways is developed with the most modern, fully responsive HTML5 technology. As a result, you can instantly play on all platforms, including desktop, Tablet, and Mobile.

We recommend playing slots on a desktop computer for the best gambling experience.
Red Tiger Gaming Slots
All Slots