The Tomb Raider franchise started its worldwide popularity as a video game. The game was immensely popular, so it was inevitable that someone makes a feature movie out of it sooner or later. Everybody remembers that the goddess Angelina Jolie starred in the movie as the invincible Lara Croft. Not much later, Microgaming, the software developer specialized in gaming software, developed the slot game with the title of Tomb Raider. Of course, it is also featuring the brave and sexy treasure hunter Lara Croft. Every men’s dream woman. Vow!

We show casinos that are accessible from your country.

Players from United States are not allowed to play this slot. Please, consider the slots below

Hero School: All for One

The theme is full of mysterious golden idols, tigers, the familiar Tomb Raider logos, and of course, the incomparable Lara Croft herself. Everyone around the world knows that Lara Croft is the most important character in the original story, and she can show up anywhere to trigger the free spins with a 3 times multiplier.

The scatter symbol is the instantly recognizable Lara Croft. Obviously, She is the main character of this 5-reel, 15-payline, multiple-coin Video Slot, with a Wild and Scatter Symbol, Bonus Feature, and Free Spins. Players can bet up to 5 coins on each of the 15 paylines, totaling $75.

Three or more Lara symbol sets off the free spins with a 3 times multiplier. And this is the expected feature where the big bucks start rolling in.

When three to five Bonus idols appear, you will see the Tomb bonus screen where you’ll see 12 tomb idols. You have five picks to choose a bonus win.
With a maximum bet, winnings of up to $7,500 are achievable, and with the free spin three times multiplier feature, that reward can soar to $112 500.

The well-thought-out and nicely executed visuals of this slot is remarkably able to give back the movie’s tense mood. The vibrant colors of the graphics carry an adventurous lost treasure hunting urge. However, playing this video game gives you only an average excitement if you are out of luck, and the free spins won’t come often enough. Moreover, if you pick the top bonus win, you can stand up from your chair with a handsomely fat wallet.

If you keep on playing and have some luck, maybe some more massive payouts will make you coming back for more winning adventures. Start spinning the reels for a financial adventure and some fun with this exciting video slot.

Tomb Raider Microgaming online slot machine is available for either download or instant play version for all platforms, including PC and Mac desktop, iPad, Android on Tablet and Android, IOS, on Mobile phone.
Enjoy Your Win! 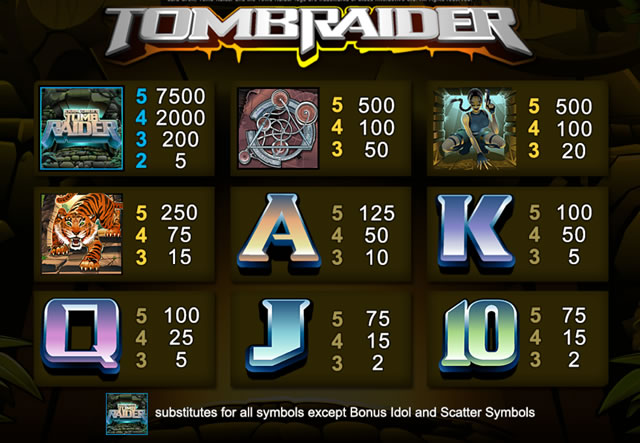